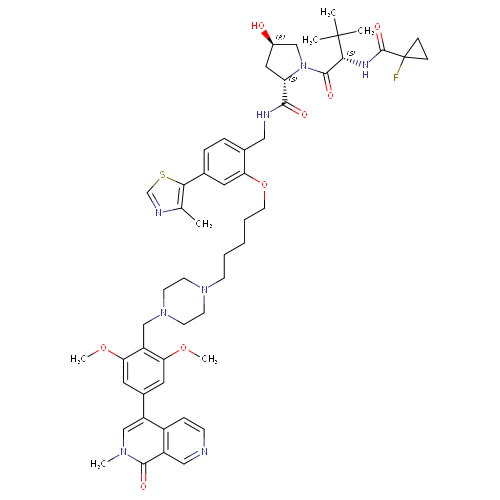 (0 ratings)
note: The Chemical Probes Portal only endorses compounds as chemical probes for use as specific and selective modulators of the proposed target if they receive three or more (3-4) stars.
Download Data

VZ185 is a new high-quality chemical degrader probe of BRD9 and BRD7. Its target binding and cellular effects have very convincingly been demonstrated. In vivo data have not been shown in the original paper. High affinity (low nanomolar Kd values) to Brd9 and the ternary E3 complex are shown by orthogonal biophysical assays. A fast, complete, and lasting degradation of Brd7 and Brd9 was seen in cells and degradation was confirmed in several cell types. The mechanism of action was validated by carefully designed control experiments, and selective degradation of BRD7/9 was demonstrated by proteomics. VZ185 showed high water solubility and stability in blood plasma and microsomes. Membrane permeability (PAMPA) is low; thus, the high cell activity is perhaps due to the catalytic mechanism of PROTACs. Of note, in some cells a high concentration (1 µM) of VZ185 induced less degradation than a low concentration (10-100 µM), which is suggested to be due to the so-called hook effect.

VZ185 together with its published inactive control is an excellent degrader of the bromodomain proteins BRD7 and BRD9. MS based experiments showed that this PROTAC is highly selective and potent. Experimental validation is sound the PROTAC is comprehensively profiled. The PROTAC has not be optimized for in vivo use.

VZ185 is a potent and effective degrader of BRD7 and BRD9 in cells.  The activity of VZ185 has been clearly linked to the binding to BRD7 and 9 as well as VHL.  Convincing time-course and dose-response data is also presented with added data clearly showing proteasome involvement as well as proteomics data showing clean’ BRD7/9 in RI-1 cells. BRD7 and 9 are close with respect to their Kd and DC50, yet a slightly shifted curve is seen between the two homologs, which is why the 1 uM dose should be the upper end of a d.r. range with perhaps 300 nM being safer to effect full degradation without the beginning of a hook effect.  How this will be similar of different across cell types remains unclear, thus a dose lower than 1 uM should always be tested and perhaps 300 nM is a more relevant dose. While selectivity in an RI-1 proteomics experiment was reported it would have been nice to see a lack of binding to other family members, or a greater characterization of the negative control cis-VZ185. Cis-.VZ-185 presumably still binds to BRD7/9 but no longer effects degradation.