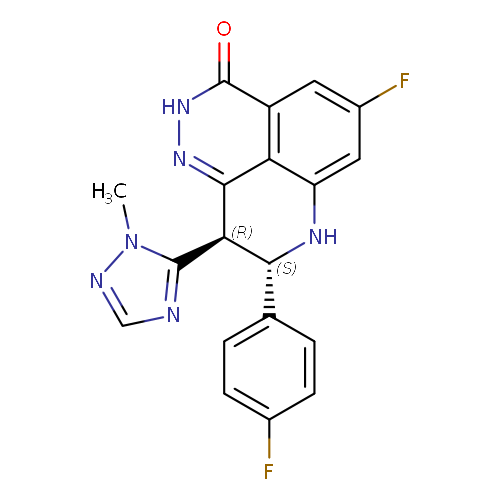 Talazoparib is a PARP 1/2 inhibitor. This agent is an excellent tool to study PARP inhibition in both the cellular and in vivo setting.

Talazoparib is an extremely potent dual PARP1/2 probe, with biochemical potencies against full length PARP1 and PARP2 slightly greater than other clinical PARP inhibitors. It's activity in BRCA1-, BRCA2- and PTEN-deficient cells relative to velaparib, rucaparib and olaparib is particular striking (>50-fold more potent across all cell lines tested). The in vivo efficacy for this compound in MX-1 xenograpft model (BRCA1 deletion) is outstanding, with excellent efficacy seen at 0.33 mg/g dose.

Mechanistic studies with a relatively weak stereoisomer (LT-00674) of talazoparib showed a correlation between biochemical activity and cellular activity, which supports the argument that the surprising activity in vivo is on-target. However, the fact that the compound has significant activity against other PARP family members (pIC50 on PARP3=7.2, TKKS2=6.97) suggests that biological activity related to other PARP family members cannot be ruled out. On the other hand, the compound has been profiled against a set of unrelated protein targets in and against the related protein PARG and was found to be inactive. Therefore, talazoparib can be considered a very useful probe for interrogation in biological experiments, particularly when used in conjunction with other PARP1/2 inhibitors such as velaparib.