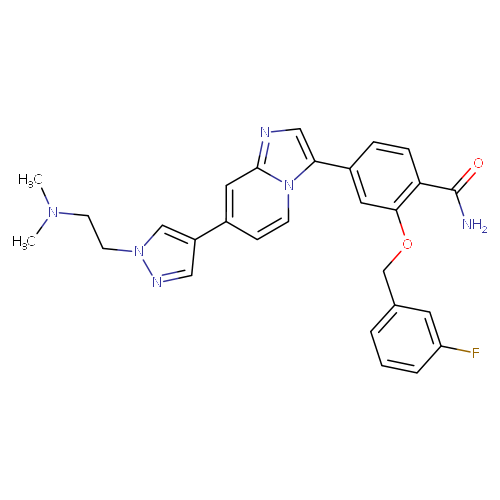 Probe MBM-55 is in the process of SERP review.

Additional validation is required to determine whether MBM-55 engages NEK2 in cells. The cell-based data is simply antiproliferative data and the compound does not elicit significant potency in these assays. As for animal-based studies, only limited pharmacokinetic profiling was done in rats. MBM-55 demonstrated a short half-life and was efficiently cleared. Additional optimization is required to furnish a NEK2 inhibitor with more optimal metabolic stability.

Missing connecting PK data weakens the strength of recommendation. The PK was done i.v in rat at 1mg/kg, but the model in mouse i.p. at 20mg/kg so mouse exposure is not clear. However, the biggest issue is that the in vitro Nek2 IC50 does not seem to correlate with cell IC50. For example, the Nek2 IC50 of 42g is 1nM and of 42e is 386 nM (so 386-fold difference), yet cell-based MGC-803 IC50 values are 0.53uM and 1.46 uM respectively (3-fold difference), but both are physicochemically very similar. So 42e is a much better negative control than 28a and suggests cell-based activity might be driven by something else. Noting that 42g, against an 11-kinase panel, was active at under 10 nM in more than 20% (RSK1 IC50= 5.4nM and DRK1a IC50= 6.5 nM, with IC50 values of 20nM, 57nM, 91nM against ABL, CHK1, GSK3beta, evidence is insufficient that observed cell-based activity of 42g is driven by Nek2 inhibition. This does not mean that 42g (=MBM-55) is unsuitable for use as a cell-based probe, but that perhaps the most appropriate cell-based readout has yet to be discovered. One might hope for a Nek2-based cell-based IC50 value to be closer to the region of 100nM, and where 42e should be >100x less active. In any such assay, RSK1 and DRK1a-driven activity will need to be ruled out. Furthermore, given these data and the fact that 42g is a kinase inhibitor, a full kinase panel should be undertaken to find other potent off-targets that could drive cell-based activity.