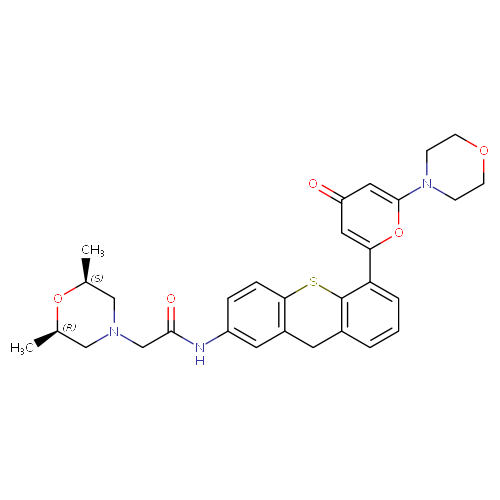 (3 ratings)
note: The Chemical Probes Portal only endorses compounds as chemical probes for use as specific and selective modulators of the proposed target if they receive three or more (3-4) stars.

This compound has the potential to be a useful probe for ATM. It appears to be potent in an in vitro assay with an IC50 ~6.3 nM. In a kinase panel screen (229 kinases, compound tested at 1 uM), it appears to have good selectivity. However, it should be noted that ATM was not among the kinases tested in the panel so this result should be interpreted with caution. The areas of concern for this compound are that 1) it contains a reactive motif associated with PAINS compounds (Baell & Holloway, J. Med. Chem, 2010), 2) there is a disconnect between the potency in vitro and in cells that hasn't been addressed experimentally, 3) a full dose-response curve for enzyme inhibition is not presented in the associated paper, and 4) little or no data is presented regarding direct engagement of the target in cells and overall cellular toxicity.

KU-60019, alongside the precursor KU-59933, were the prototypical inhibitors of the DNA repair kinase ATM. This compound displays enhanced solubility and selectivity against key off-targets compared to the parent compound. However, the later probe KU-59403 offers improved PK properties which are sufficient for in vivo use. This probe contains potential PAINs features, and, while evidence for selective on-target activity is reasonable, off-target screening was not extensive. This compound has largely been superseded by the clinical derivative AZD0156 and the probe compound described by the same team in J Med Chem, 2016, p6281 (AZ-5704, compound 74). However, this compound may be useful for secondary confirmation of pharmacology observed with these second-generation probes.

KU-60019 should be regarded as an unvalidated inhibitor of ATM kinase as no evidence of direct target engagement has been provided (e.g. SPR, CETSA) and although ATM kinase IC50 of 6 nM is reported the dose response curve is not shown.

KU-60019 was only counter-screened against 229 kinases (KinaseProfiler) and ATM kinase was not included in the panel to put the off-target activity into context.

This compound should not be used to draw biological conclusions about the role of ATM kinase until evidence of direct target engagement has been demonstrated and broader panel selectivity determined.