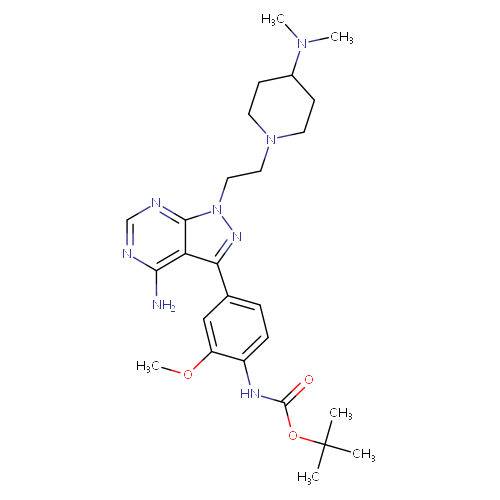 Uniprot ID: P12931
Target Class: Protein kinase
Target SubClass: TK
Potency: IC50
Potency Value: 0.5 nM
Potency Assay: Radioisotope-based assay ([γ-33P] ATP) consisting of measuring 33P incorporation on the substrate (poly [Glu, Tyr] 4:1) relative to DMSO. IC50 values were calculated from the corresponding 8-point half-log dose response curves.
PDB ID for probe-target interaction (3D structure): --
Structure-activity relationship: A library of 24 closely related analogs was developed by introducing small changes on key functional groups of eCF506 and their activity tested in MDA-MB-231 cells. IC50 values were subsequently determined against SRC and ABL for those compounds exhibiting high antiproliferative activity and for selected compounds with low activity. Analysis of the properties of compounds 12a–e demonstrated that the presence of a tertiary amino group at the position 4 of the pyperidinyl ring is essential for the activity. Substitution of the methyl groups by larger aliphatic rings was tolerated, with compounds 12d and 12e being among the most potent SRC inhibitors of the series. Removal of the pyrimidine ring (compound 12f) resulted in >3000-fold decrease in antiproliferative activity. Screening of compounds 12g–x evidenced the limited structural variations permitted at the top of the molecule to achieve high bioactivity. Most modifications of the Boc and the methoxy groups of the phenyl moiety at the C3 position led to a significant reduction in bioactivity. Even minor chemical modifications such as the substitution of the carbamate group by urea (12i) or amide (12j), or the change of the methoxy by OH (12s), resulted in >200-fold decrease in both antiproliferative properties and SRC inhibitory activity. Remarkably, introduction of a benzylamino group instead of the Boc was tolerated well, as observed from the bioactivity exhibited by compound 12m. However, introduction of endocyclic nitrogen atoms in the ring (see 12n and 12o) dramatically reduced compounds’ activity, particularly in the ortho position. Interestingly, while the methoxy group is required for maintaining high levels of activity when the Boc group is present in the structure (see 12s–u), substitution of the Boc group by an ester tolerated the elimination of the methoxy group (see 12w and 12x).
Target aliases:
Proto-oncogene tyrosine-protein kinase Src, SRC1, ...

This probe is selective for SRC over ABL, but only a small number of off-target kinases (15) were screened. It appears to be equipotent against YES and is thus at least a dual inhibitor (SRC/YES). It also appears to be suitable for use in cells and in vivo.

This is an ATP-competitive SRC inhibitor, selective for Src-family kinases over ABL1. In MCF7 cells, it inhibits auto-phosphorylation of SRC pY416 and its downstream substrate FAK pY861 at low nanomolar concentrations, with complete inhibition observed at 100 nM. Treatment halts migration of MDA-MB-231 cells at 10 nM in a scratch-wound cell-migration assay. It inhibits proliferation of MCF7 cells at higher concentrations. At typical screening concentrations, SRC as well as other SRC family kinases may be inhibited (YES1, LYN, LCK, HCK, FYN, FRK, FGR, BLK). The compound has good water solubility, drug metabolism and pharmacokinetics properties, and oral bioavailability. In vivo, in zebrafish embryos, eCF506 halts SRC-associated neuromast migration. No cardiotoxicity was observed in zebrafish. eCF506 demonstrated in vivo SRC inhibition in a xenograft model of HCT116 cells in mice.

IC50 values of 5 nM or less were observed for the 9 SRC family kinases included (BLK, FGR, FRK, FYN, HCK, LCK, LYN, SRC, and YES); there are two additional SRC family members, SRM and BRK, that were not included. Thus, from the currently available data, eCF506 might be considered a probe for SRC family, not just SRC itself. Unfortunately, although it demonstrates remarkable selectivity over ABL, it has only been evaluated against 5 total kinases outside of the SRC family. The compound has favorable physical properties and is amenable to in vivo usage, but its utility is limited by restricted selectivity information.

eCF506 is a potent and selective inhibitor for the SFK family of kinases. Although it claims to be selective towards SCR proto-oncogene tyrosine-kinase, it showed the same potency than for other SFK members (IC50 0.5-5.4 nM for YES, LCK, LYN, FGR, etc). However, it is highly selective toward Abelson (ABL) Tyrosine Kinase (950 –fold), but a wider kinase profiling should be screened. The studies probed showed that the compound is a Type I kinase inhibitor, with potent antiproliferative properties and with proof of stopping MDA-MD-231 cell migration. The probe showed good physicochemical properties and good DMPK profiling, being suitable to use in cells (10-100 nM) and in in vivo models (100 nM-500 uM).