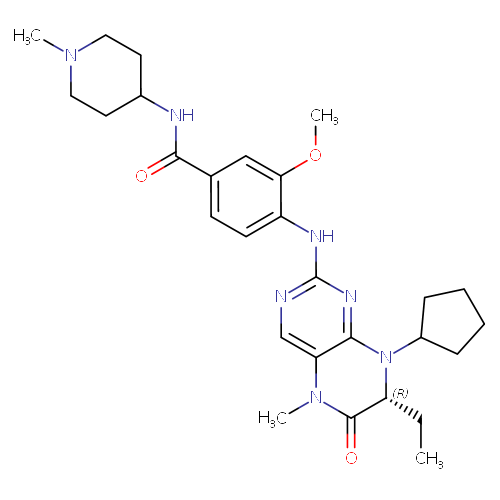 BI 2536 given i.v. once or twice per week is highly efficacious in diverse xenograft models with acceptable tolerability by inhibiting cell proliferation through a mitotic arrest, and subsequently induction of tumor-cell death. Administration of BI 2536 at 50 mg/kg once or twice per week significantly inhibits growth of HCT 116 xenografts with T/C of 15% and 0.3%, respectively. BI 2536 treatment twice-weekly also leads to excellent tumor-growth in BxPC-3 and A549 models with T/C of 5% and 14%, respectively.

BI 2536 blocks the activities of PLK2 and PLK3 with IC50s of 3.5 nM and 9.0 nM, respectively. In HeLa cells, BI 2536 treatment ranging from 10-100 nM leads to the blocking of the recruitment of γ-tubulin and phosphorylation of APC6 at mitotic centrosomes, inhibition of cohesin release from chromosome arms, induction of monopolar spindles, as well as a range of other mitotic processes that are known to depend on PLK1. BI 2536 treatment leads to HeLa cell arrest in G2/M, subsequently a sub-G1 DNA peak indicative of DNA breakdown and apoptosis, and accumulated cleaved PARP p85 fragments in a concentration-dependent manner. BI 2536 inhibits the growth of a panel of 32 human cancer cell lines with EC50s of 2-25 nM, while blocking the proliferation of exponentially growing hTERT-RPE1, human umbilical vein endothelial cells (HUVECs), and normal rat kidney (NRK) cells with EC50s of 12-31 nM.  PLK1 inhibition by BI 2536 reduces the growth and viability of anaplastic thyroid carcinoma (ATC) cells such as CAL62, OCUT-1, SW1736, 8505C, and ACT-1 with EC50 values of 1.4-5.6 nM.

BI2536 is a reasonably selective PLK inhibitor (PLK1/2/3) but BI2536 also targets BET bromodomains (10.1021/acsmedchemlett.5b00084). Despite being a PLK1 inhibitor that induces all the hallmarks of PLK1 inhibition, any observed cellular phenotypes should be interpreted with caution. BI2536 is considered a compound with polypharmacological activity; it has been superseded by Volasertib (BI6727).