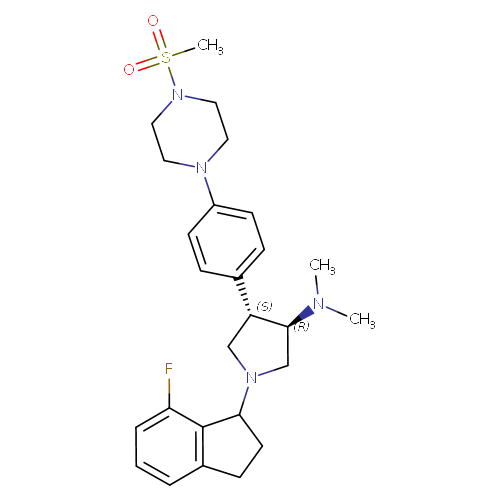 A-395 associates tightly to EED in a 1:1 binding model with a KD value of 1.5 nM (shown by SPR). A-395 inhibits the trimeric PRC2 complex (EZH2–EED–SUZ12) with an IC50 of 18 nM using a radioactivity-based assay. The structurally related, negative control, A-395N, was significantly less potent against PRC2 in this assay, with an IC50 >50,000 nM. A-395 has no activity against any of the other protein lysine methyltransferases, arginine methyltransferases, or DNA methyltransferases tested (panel of 32 diverse proteins). In cellular assays, A-395 inhibits H3K27 methylation with IC50=90 nM (rhabdoid tumor cell line RD; 3 days). The negative control, A-395N, exhibits no activity in the cellular assays. In vivo activity of A-395 was tested in a DLBCL Pfeiffer xenograft model. Subcutaneous (s.c.) administration of compound in an extended-release vehicle was the only route that showed a sufficient exposure profile for effectiveness. Pharmacokinetic analysis suggested that s.c. delivery of A-395 at 300 mg/kg can maintain an unbound 90% effective concentration (EC90) for at least 48 h.

This compound closely phenocopies EZH2 enzyme inhibitors, which are better-characterized and have greater in vivo utility. Therefore, this would be an alternative choice for EZH2 inhibitor-resistant mutant cells or to specifically probe the role of EED WD40-H3K27me3 interactions.

It works well in cells and was reported to inhibit both H3K27me2 and H3K27me3 marks with IC50=390 nM, 90 nM, respectively, in human rhabdoid tumor cell line RD after 72 hours. A-395 inhibited proliferation in multiple myeloma cell lines with EC50s=1-2 uM after 10 days in RPMI 8226, MM.1s and L-363 cell lines. A-395 is highly selective and, thus, can be used to tease out the EED pharmacology in cells and its role in cancer and other diseases. It was selective against a panel of 32 diverse epigenetic methyltransferases including lysine, arginine, and DNA methyltransferases as well as against a survey of other epigenetic ‘reader domains’, including the WD-40-containing protein WDR5 (as measured by TSA) and against the chromodomain of PcG protein CBX7 (as measured by fluorescence polarization).

A-395 was tested in a xenograft model using the DLBCL Pfeiffer cells in SCID mice. A-395 was administered at a very high concentration (300 mg/kg subcutaneously, twice per week for 35 days) and showed significant reduction of the tumor volume up to 150 days as well as the H3K27m3 levels measured after 1 week compared with vehicle. Based on reported pharmacokinetic studies, subcutaneous delivery of A-395 at 300 mg/kg can maintain an unbound 90% effective concentration (EC90) for at least 48 hours. Based on the long lasting exposure after the subcutaneous administration, I suspect that A-395 may also be administered IV or IP with a proper formulation provided that the compound is soluble at the tested concentration. Development of an improved analog with good oral, IV or IP exposure would be beneficial. Selectivity profiling in a broad CEREP panel would help determine if any of the phenotypic or in vivo readout is partially due to some off-target activity. Also there is no evidence that the H3K27m3-mark reduction is responsible for the phenotypic and in vivo response.